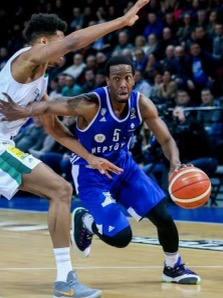 During Jerry Johnson’s senior year, he became the career scoring leader (1,792) and led the McCaskey HS basketball team to the 2001 Lancaster-Lebanon Section One and league championships.

At Rider University, Johnson was the 2001-02 Metro Atlantic Conference Rookie of the Year and three-time All-League selection, a three-time team MVP and Rider’s Male Athlete of the Year in 2005. He stands at No. 2 in career scoring at Rider with 2047 points and fifth in career assists with 421. He was inducted into the Rider University Athletic Hall of Fame in 2013. In September 2019, he was inducted into the MAAC Honor Roll, where honorees were enshrined in “The MAAC Experience” exhibit at the Naismith Basketball Hall of Fame.

When he returned to Lancaster, Johnson committed to his community by founding the Back2Basics Youth Development and Sports Foundation. Johnson is a 2020 McCaskey Athletic Hall of Fame inductee.