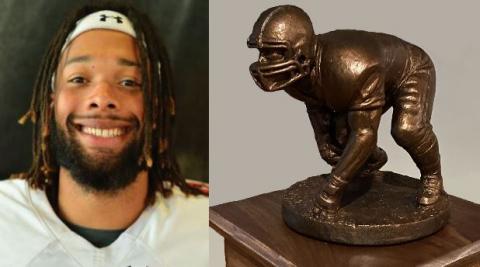 Defensive end Caleb Murphy of Ferris State has been named the winner of the 2022 Gene Upshaw Division II Lineman of the Year Award presented by the Manheim Touchdown Club.

Murphy is the third straight Bulldog to win the award, joining Dylan Pasquali (2021) and Austin Edwards (2019). The award, open to linemen on both sides of the ball, is voted on by the nation’s NCAA Division II sports information directors. All nominees must be seniors or graduate players/transfers. Bios of all the finalists are below.

Also a finalist for the Harlon Hill Award as the D-II player of the year and the Ted Hendricks Award as the nation’s top defensive end at any level, Murphy has been a gamewrecker for the Bulldogs, totaling 87 tackles, 24.5 sacks, and 36 tackles for loss along with two forced fumbles in 2022. He already has been richly awarded this postseason with the D2 Conference Commissioners Association Super Region 3 Player of the Year and Great Lakes Intercollegiate Athletic Association Player of the Year awards as he not only leads NCAA Division II in sacks but set the NCAA all-divisions single-season record with his 24.5.

Murphy helped the Bulldogs win the 2021 NCAA Division II national championship and return to the 2022 semifinals after their win over rival Grand Valley State in the quarterfinals, a game in which Murphy had 10 tackles and 1.5 for a loss. After being announced as the award winner, Murphy had a sack, 1.5 tackles for a loss and a forced fumble in a 38-17 win over West Florida, sending the Bulldogs back to the championship game, and then 3 tackles, 2 for a loss, and 1.5 sacks as Ferris State beat Colorado School of Mines 41-14 to repeat as national champion.

Murphy will be recognized by the Manheim Touchdown Club at a later event. The award recipient also has an invitation to participate in front of professional scouts and coaches at the East-West Shrine Bowl Feb. 2 in Las Vegas, Nev.

The NFL recognizes, endorses and supports the winner of the award by guaranteeing a place in the all-star games. The support comes as recognition and appreciation for the late Upshaw, photos below, who was not only an All-Pro lineman for the Oakland Raiders, but later served as the executive director of the NFL Players Association for 25 years. Upshaw, a former standout offensive lineman at Texas A&I University (now Texas A&M Kingsville), was inducted into the Pro Football Hall of Fame in 1987 in his first year of eligibility. 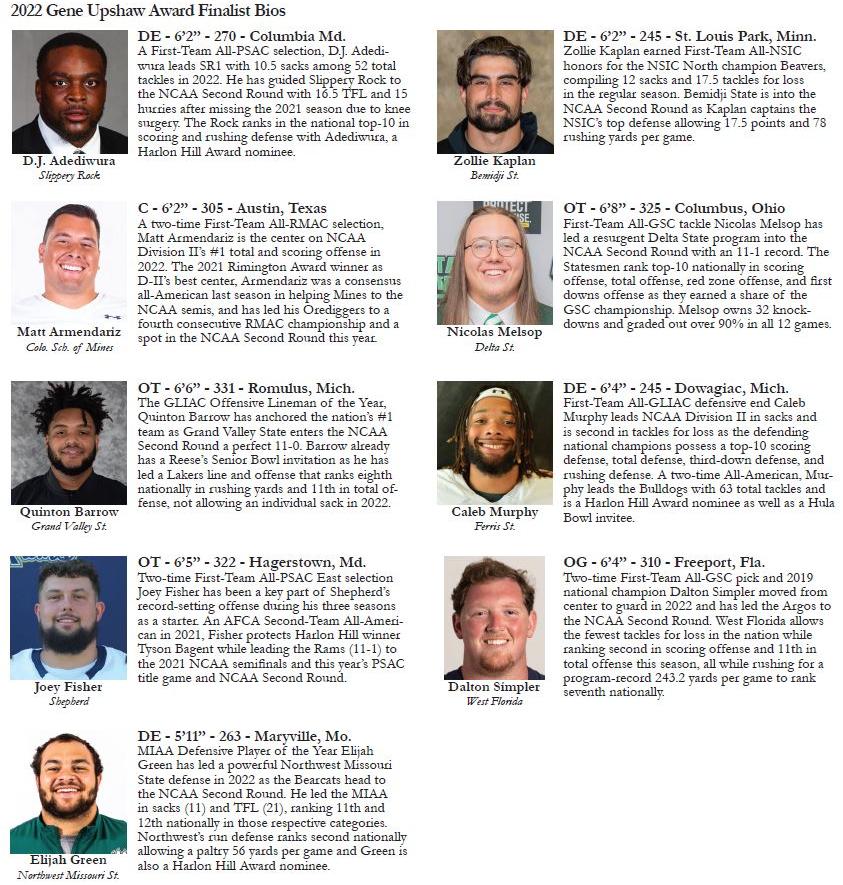